TEAMS3 is the major engineering support services contract at the NASA Langley Research Center. It is the successor to a long series of contracts (from the seventies) that have provided high-end research and engineering expertise to LaRC. As a subcontractor to Analytical Mechanical Associates (AMA), ViGYAN has employees working in areas including flight dynamics, computational fluid dynamics (CFD), wind tunnel test systems, advanced adta analysis methods, support for the Space Launch System (SLS), cost analysis and project scheduling, and the development of data acquisition systems. 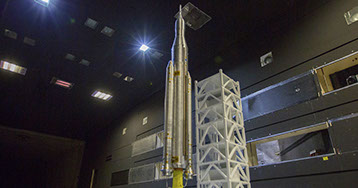 This task provides wind tunnel testing support for the Space Launch System (SLS). It includes tasks to develop and perform analyses of experimental and computational aerodynamics results for the SLS vehicle for the purpose of estimating experimental, modeling, and overall uncertainties in the ascent, liftoff, and booster separation static aerodynamic databases.

This project is a derivative of the ongoing SBIR Phase III Propeller Test Stand.For this task, however, ViGYAN is developing a compact 400 kW, 24000 rpm motor of less than 9” diameter to suit the confined space in a Tail Cone thruster fuselage model. This type of motor is not COTS (commercial off the shelf) and requires a custom design of stator and rotor with proper bearing systems, while optimizing the volume of the stator to provide maximum power at 24000 rpm. The aim of this phase is to identify optimal motor components, cooling systems and design of the drive motor, bearing, and shaft that interfaces with the rotary balance. Is there a photo & caption for this?

ViGYAN is a subcontractor to Jacobs Engineering on the LaRC Center Maintenance, Operations, and Engineering (CMOE) contract. ViGYAN offers engineering expertise in the following areas 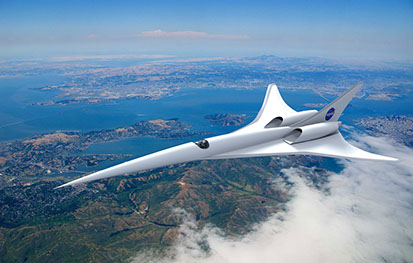 The NASA Langley Low Speed Aeroacoustic Wind Tunnel (LSAWT) performs acoustic signature evaluations of various aerodynamic test articles. It has traditional been used for propulsion models simulating turbines with heated air. The wind tunnel has an open jet test section whose plenum is the anechoic chamber. An induced draft fan provides suction of atmospheric air with the following wind tunnel test capabilities for the open jet in the anechoic chamber.

The NASA Langley Low Speed Aeroacoustic Wind Tunnel (LSAWT) performs acoustic signature evaluations of various aerodynamic test articles. It has traditional been used for propulsion models simulating turbines with heated air. The wind tunnel has an open jet test section whose plenum is the anechoic chamber. An induced draft fan provides suction of atmospheric air with the following wind tunnel test capabilities for the open jet in the anechoic chamber. Characteristics of LSAWT flow are:

The project is being implemented through a SBIR Phase III contract with ViGYAN, Inc. The three-year effort is comprised of activities including a motor evaluation, detailed design, fabrication, and install/test in the LSAWT.

ViGYAN has been active in the development and use of advanced Computational Fluid Dynamics (CFD) codes for the analysis of complex fluid physics. It's VGRID unstructured grid generation methodology became a part of the NASA Langley TetrUSS software system; this software has won two NASA Software of the Year awards (1996 and 2014).

Damper Systems is there an image & caption

The ViGYAN Active Damping technology was originally conceived in 2005 and 2006 through an Air Force small business innovation research SBIR award. The system uses wind tunnel balance signals to detect and minimize unwanted vibrations of wind tunnel models mounted on a cantilevered sting. Subsequent versions of the system were implemented at the NASA Langley Research Center and NASA Ames for larger models and operations at cryogenic conditions.

The current operational active damping systems attenuate vibrations in the pitch and yaw axes. They function by utilizing piezoceramic actuators located at the base of the sting to counteract the vibrations caused by aerodynamic turbulence, especially at higher angles of attack.  Even though the size and utility of the systems have improved since its original development, the basic concept remains the same and continues to use ViGYAN proprietary control laws and code. The latest production version of the system, being developed for the Arnold Engineering Development Center (AEDC) under a Phase III SBIR contract, will addresses roll axis vibration and snap-back.

ViGYAN was recently awarded an Air Force SBIR to explore an advanced damper concept that eliminates the piezoceramic actuators (prone to breakage) and includes an automatic tuning system for simpler implementation.

Is the image good, and if so I need a caption 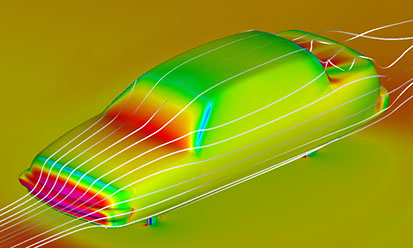 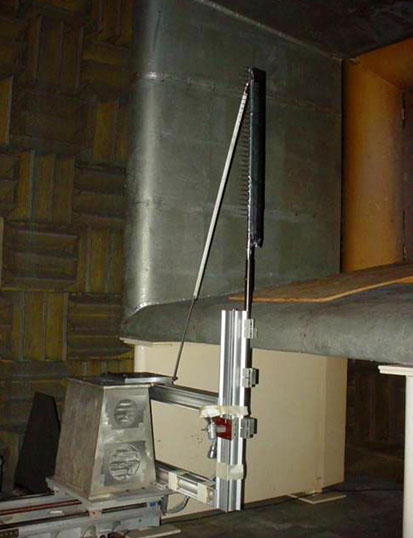 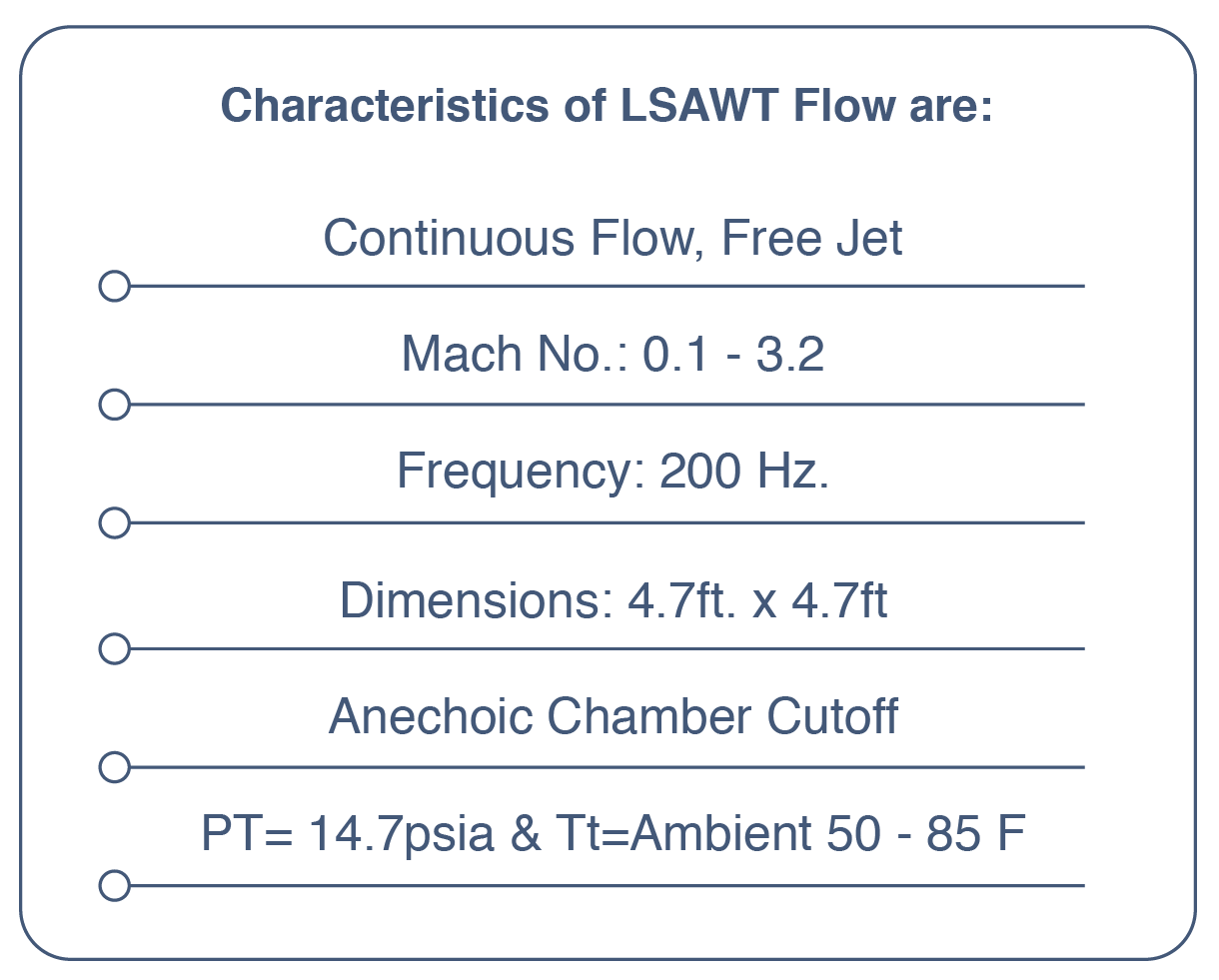 Atmospheric turbulence impacts aircraft safety, costs and utility. From 1988 to 2001, turbulence cost the airline Industry $31 billion, as a result of injuries, grounded aircraft, diversions, delays and cancellations due to reduced airspeed and increased fuel usage.

General Aviation aircraft have fewer options than airliners to avoid turbulence and consequently face greater hazards. As a result, many small aircraft may find themselves encountering unable to fly for many days each year. This limitation is a definite factor in the lack of acceptance, by the general public, of personal aircraft.

The application of an effective Active Ride Improvement System to both commercial airliners and small airplanes would improve safety, reduce costs, and lead to better utilization of general aviation airports around the country. While the system is applicable to all classes of aircraft, imagine the impact on market share of the first "little airplane" to have an effective Active Ride Improvement System.

Gust alleviation systems have been tried many times, but the results have been unacceptable on small airplanes due to their complexity and inability to move conventional controls fast enough to offset the gust lift as it happens. ViGYAN's Active Ride Improvement System is an open loop system with 'leading' sensing and small chord flaps that are more efficient aerodynamically than the large chord flaps, and can be moved fast enough (due to 1000 times less inertia) to practically kill the gust lift as it happens.

For typical high-cruise general aviation aircraft, our analysis indicates that 90% of the gust lift can be alleviated with the Active Ride Improvement system.

Currently, ViGYAN is developing a wind-tunnel demonstration of these principles with a 1/12-scale wing-body model.

ViGYAN has discussed the program with several General Aviation companies about forming a partnership that will take the project to the next level. 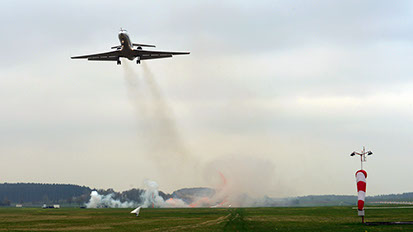